The company was established in 1896 in Copenhagen by the brazier Waldemar Nielsen - under the name Vald. Nielsen Metalvarefabrik. The company developed steadily under the Nielsen family ownership until the late 60s. Due to lack of space it was decided to relocate the plant to more modern premises in Haderslev. In 1969-70 a modern factory designed for industrial production was built. During this period the original NITO couplings achieved an increasing share of the company’s turnover.Other products from this period were the NIF gas taps, OPAL showers, and TOKANI drinking valves.
In connection with an impending generational change in the early 1980s the company was taken over by NKT A/S and became a fully owned subsidiary of A/S Fisker & Nielsen (Nilfisk Group). Under this ownership the name was in 1985 changed to Nitodan A/S, which reflected the company’s main product. Today the company name is NITO A/S.
As part of changing strategies in the NKT group, the company was sold off in 1995. Today NITO A/S is owned by Vikan A/S.The Original NITO quick coupling
The original NITO coupling was developed at the behest (request) of a major customer, who had brought home a quick coupling from the U.S. Building on the company’s expertise in processing brass, this product was improved in several respects and thus became the start of the wide range of NITO quick couplings.The NITO name originated as a contraction of the name Thorvald Nielsen, which was the name of the owner’s son.Other product groups in the NITO assortment
NITO does not only include quick couplings for water, but also a number of other specialized quality products. Today NITO manufactures a wide range of quick couplings, water and spray guns, as well as solutions for cleaning. The quality level of the Original NITO couplings has of course been continued in the other NITO product range.NITO Click Couplings
NITO Safety Couplings
NITO Edelstahl Couplings
NITO High Pressure Couplings
NITO Water Couplings
NITO Clean MiniMix
NITO I and II Pistole 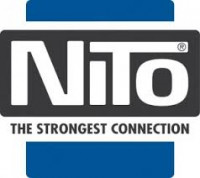